MELD – Music Encoding and Linked Data – is a flexible software platform used by several academic research projects to combine digital representations of music, such as audio and notation, with contextual and interpretive knowledge in the Semantic Web.

It can be helpful to think of MELD as a framework, as illustrated in the figure below, consisting of:

Behind the scenes in a typical MELD app, users and software agents create semantic annotations of music concepts and relationships, which are associated with musical structure specified by the Music Encoding Initiative schema (MEI). Annotations conforming to the Web Annotation data model are expressed as JSON-LD, allowing alternative music and use-case vocabularies to be applied, to support e.g., popular vs. classical music structures, or rehearsal, performance, or analytical applications. The same underlying framework retrieves, distributes, and processes information that addresses semantically distinguishable music elements. Further knowledge is incorporated from external sources through the use of Linked Data, which is also used to match annotation types and contexts to rendering actions displaying the annotations upon the digital score. 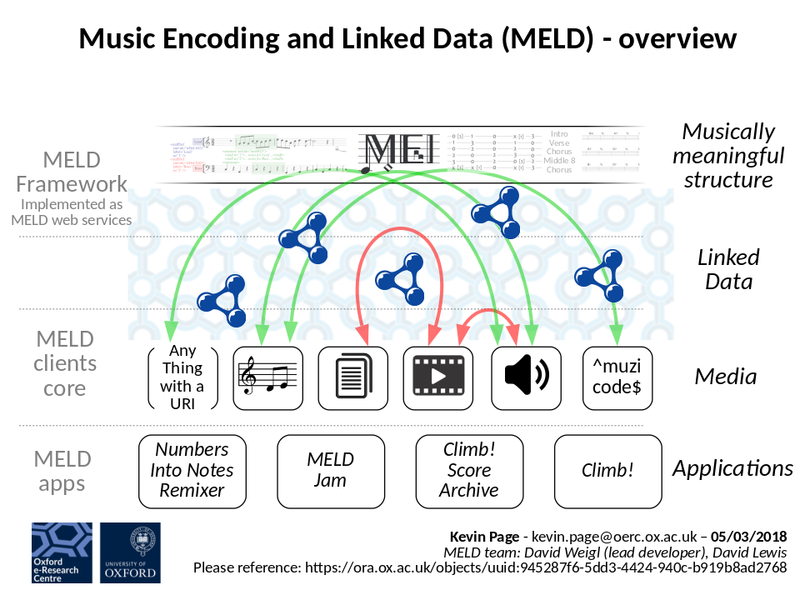 MELD exists due to the dedicated work and support of the research teams, projects, and funders detailed on the Apps and Projects page, including significant support from the AHRC, EPSRC, and EU Horizon 2020.